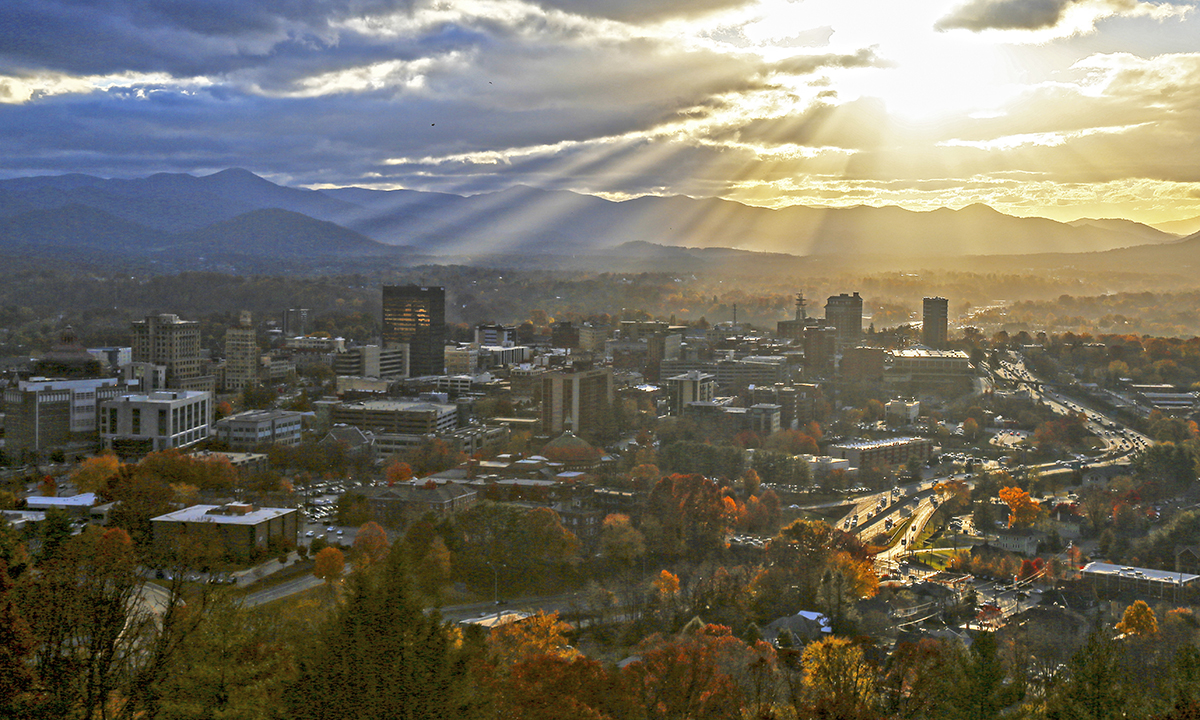 Asheville, NC is nestled in the Blue Ridge Mountains at 2,134 feet above sea level. The city sits at the confluence of the Swannanoa River and French Broad River. The climate of Asheville is considered a Continental climate and resembles that of the Piedmont region of the southeastern United States.  Since the city rests at a higher altitude than the Eastern part of the state, temperatures are cooler.

Throughout the four seasons, the mountains of Asheville act as a barrier, blocking extreme weather from entering the Piedmont of eastern North Carolina.The temperature and climate of Asheville draw retirees, second home buyers, and those seeking to relocate. Each season boasts its own unique characteristics and benefits.

Spring is a magical time of year in the mountains of Western North Carolina. Starting in March, temperatures warm up from the 50s into the low 60s. The evenings are chilly, but warm and sunny afternoons balance out the days. Spring and summer are the wettest months of the year in Asheville with monthly rainfall averaging between 3 and 3.4 inches. Overall, the weather varies wildly throughout the spring. The season is, however, very scenic as the wildflowers, trees, and greenery blooms.

July is the warmest month of the year in Asheville, but temperatures remain moderate with only a handful of days posting temperatures over 90º Fahrenheit. Even on the hottest summer days, cool mountain streams, rivers, and trails offer respite with lower temperatures. Summertime in mountain valleys are characterized by comfortable temperatures and scattered afternoon showers.

The fall brings colorful leaf displays across the mountains during peak leaf season, one of the most popular times of the year to visit Asheville. During October, visitors flock to Asheville and the nearby Blue Ridge Parkway to observe the changing of color. This color change starts at higher elevations and makes its way week by week to the lower elevation of the city. Because of this, driving along the Parkway is a wonderful way to take it all in at every elevation. October is also the driest month of the year, with an average of 2.1 inches of precipitation.

Winters in Asheville are cool and January is typically the coldest month of the year. The average high for January is 47º and the average low is 27º. Locals note that downtown Asheville typically feels colder than other areas, partly due to the strong winds that tunnel down the city blocks. Asheville typically receives an average of 11 inches of snowfall each year. At lower city elevations, the snow melts away quickly. Higher up into the mountains, snow and ice can stick around for weeks.

The beautiful mountain climate makes Asheville an ideal place to live. If you can weather the cold and windy winters, you are rewarded with three temperate seasons. At any point of the year, higher elevations offer chillier temperatures, while lower elevations are warmer. This flexibility make summer hiking a popular and enjoyable hobby.

The frost free growing season lasts 176 days (April 21 to October 14) in Western North Carolina. Many homesteaders, urban farmers, and garden enthusiasts take advantage of the growing season to cultivate their own herbs, fruits, and vegetables.

Locals and visitors take advantage of the moderate spring, summer, and fall months with a host of activities. Popular outdoor activities include floating down the French Broad River, hiking along wooded trails in the Blue Ridge Mountains, driving along the scenic Blue Ridge Parkway, and soaking up local attractions.

Explore my blog to learn why Asheville is a top city for retirees, see my picks for Asheville dining, and browse the best activities for seniors.